‘Peepli Live’ to ‘Ludo’: Shalini Vatsa on her decade-long run in Bollywood 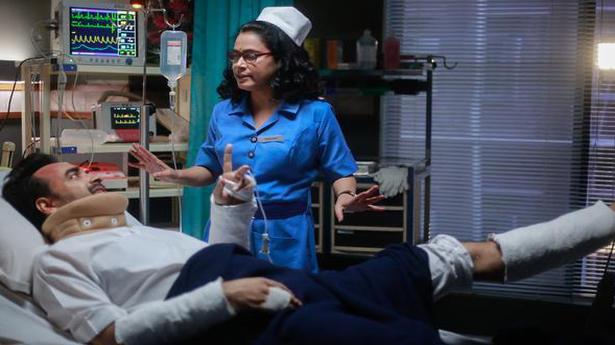 Actor Shalini Vatsa talks about her short yet amiable romantic strand with Pankaj Tripathi in recently-released ‘Ludo’, and completing a decade in Bollywood

There is an air of mystery Shalini Vatsa seems to have built that even the Internet cannot breach.

She rarely gives interviews and is hardly seen during film promotions. Shalini admits that she is a quiet person and the silence she carries with her has resulted in a character trait of sorts — mind you, she is not a recluse (“I am someone who gets into the groove; gets in the corner of what I am doing.”)

As an actor, she feels silence is a powerful tool of communication — something that is evident in her concise answers, “I really enjoy silence and tend to play with it to the best of my capacity,” says Shalini, drawing an example from Sacred Games, in which she played Kanta Bai, who harnesses the demon-like Ganesh Gaitonde (Nawazuddin Siddiqui).

In the aforementioned scene, an aged Kanta Bai visits Bunty (Jatin Sarna) in his hideout. Shalini says she felt the silence was a little too much in what was a reasonably long sequence. She expected the episode’s director, Vikramaditya Motwane, to trim it, but was delightfully surprised when he retained the essence of the scene. “There is so much you can convey with silence. It’s very powerful, if done right,” she says.

The quiet nature of Lata Kutty, the character she portrayed in the recently-released Ludo, and a gentle romance that blossoms with Sattu (Pankaj Tripathi), are what attracted Shalini when she was offered the role of Kutty, a Malayali nurse in Mumbai. “It is not that Anurag [Basu] gave me the brief saying, ‘There is a lot of silence in the film’. Sometimes, it comes from instinct, when you are on the set especially.” It is one of the reasons why this particular strand stood out in Ludo, she believes.

There is a certain emotional intensity that Shalini brings to her characters, whether it is Kanta Bai (Sacred Games), Dhanya (Peepli Live), Karma Devi (Gurgaon) or even Lata Kutty. She displays calmness and strength at once, a quality she attributes to the writers and directors she has worked with. “When you have a talented team that is working with vision and clarity, then things come together in a nice manner,” she says, adding, “My job is to deliver as per the director’s vision.”

Yet, Shalini does not have an answer to why she is underutilised in films, although it is a question reserved for filmmakers. “It’s a kitty which was built by itself,” she says with a laugh, “I would want to do much more work than this. But I never had a wishlist per se. Even the directors I have worked with happened by chance.”

Could it also be because of the kind of films Shalini has associated herself with? In film industry’s lingo, they are anything but ‘mainstream’. “When Peepli Live came out, it was a pioneer of the shift in content that was happening. It almost got the recognition of a mainstream film. Likewise, when I joined Sacred Games, I didn’t know how to categorise it because OTT was still making inroads. But it became what it became,” says Shalini.

She adds that it is hard to predict the outcome of a film, regardless of the format. “Even today, you don’t consciously categorise films into independent or popular cinema. At least I don’t think like that.”

The emergence of digital platforms has thrown up a lot more opportunities, not just for actors but for directors, writers and technicians as well, says Shalini. Does she feel there is more meat for actors to sink their teeth into in OTT, as opposed to mainstream cinema? “I would say digital has really enhanced the scope for opportunities,” she says, adding, “Audience is lapping up all kinds of content. Of course, for an actor, getting into the character is a long process. But the scope for exploration is more on OTT.”

This year, Shalini completes a decade in Bollywood and two in theatre. Looking back, she does not think it was a lonely journey after all. “I have been fortunate with a terrific support system, at home and with friends. I am grateful to all filmmakers who gave such wonderful characters,” she says.

She credits theatre stalwarts Barry John and Habib Tanvir for grooming her and helping her achieve an edge to her performances. “They are masters and I have worked intensively and extensively with them. What I bring to the table comes from them. However, in films, I know I have only been using the basics I have learnt from them.”

Shalini admits that she is not into films to feed off the theatre artiste. The language or medium was never a question for her. “There’s a commitment to the character, performance, director and the team. It’s the performance that matters,” she concludes.

Actor Kishore discusses playing the deadly forest brigand for the second time, and his newest passion: farming He has explored many roles on screen...
Read more
INDIAN MOVIES

Sreenath Bhasi: I try to have fun with both music and movies

The Mollywood actor talks about polishing his musical skills during the lockdown and composing for ‘KozhiPunk’ with Sekhar Menon  Pandemic or not, Malayalam actor-musician...
Read more
INDIAN MOVIES

‘Outside The Wire’ review: This plotline needs a charge up

Anthony Mackie stars as a stoic cyborg soldier who leads a storyline that drones on before tiring itself out Hollywood has been saturated...
Read more

AHMEDABAD: A doctor and three others were held for allegedly trying to claim insurance with the help of bogus Covid-19 medical records in...
Read more
Load more

Newspaper is your news, entertainment, music fashion website. We provide you with the latest breaking news and videos straight from the entertainment industry.